For those readers who fancy a change from Brexit and UPC-fate related news, preferring instead a reminder of good, old fashioned IP cases, you are in luck.  A couple of weeks ago, His Honour Judge Hacon (sitting in theHigh Court) handed down his decision in Glaxo v Sandoz [2016] EWHC 1537 in which he was asked by Sandoz to determine, on a summary judgment application, whether Glaxo's EU Trade Mark No 3890126 was invalid.  The answer - yes.  Luke Maunder (Bristows LLP) reports on the decision which will be interest to anyone who loves color combination trade marks or trying to figure out how to precisely and clearly ring fence the scope of trade mark protection:

Perhaps it is its common association with royalty and mystery/magic (and chocolate, unless you are the Court of Appeal), or perhaps it is its humble origins in Sea Snail mucous, but there is clearly something about the Colour Purple.

Glaxo was granted an EU Trade Mark (the “Mark”) for inhalers - which is used for its Seretide® inhaler - that was represented as follows: 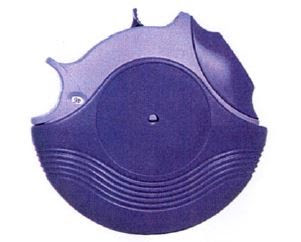 The Mark was assigned an INID designation of 558, meaning it was registered as a mark consisting exclusively of one or several colours. Glaxo was pursuing Sandoz for infringement, but the judgment concerns Sandoz’s application for summary judgment in its counterclaim for a declaration that the Mark was invalid (and by extension summary judgment on Glaxo's infringement claim).

Sandoz argued that the Mark was not a sign nor was it capable of being represented graphically within the meaning of Article 4 of the Trade Mark Regulation (TMR). At the heart of the argument was a submission that the Court should put the emphasis on the description to determine the scope of protection, which showed that what Glaxo had registered was a potentially limitless number of signs (based on the proportions of colour and potential patterns).

Glaxo countered by suggesting that the Mark should be construed as an abstraction of the graphic representation (see right), with the description merely clarifying this, and that it therefore constituted a single sign. To the extent that the Mark did encompass narrow variants, Glaxo contended that such variants were permitted.

1.  How should a trade mark application or registration be construed where there is no strict congruence between the visual representation and the description, particularly in the context of a trade mark consisting exclusively of one or several colours?

2.  May a colour mark encompass more than one form, i.e. can there be variants without contravening Article 4 of the TMR. If so, how much freedom of variation is possible?

Having considered the submissions, he decided as follows:

1.  There is no automatic precedence as between the visual representation of a trade mark and its description. An application or registration for a trade mark should be interpreted by the court through its own eyes, doing its best to reconcile both despite any lack of congruence, although it must do so within the bounds of its INID designation, which was an “inflexible starting point”. As a side (but not minor) point, the HHJ Hacon did, however, reject Sandoz’s assertion that the words “consists of” in a trade mark application or registration should be taken as a term of art indicating the description was definitive.

2.  Despite some creative arguments by Daniel Alexander QC based in part on Apple’s recent registration for a 3D representation of its store layout being inevitably open to variants (as the CJEU had held there was no need to include specific dimensions), a colour mark could not be validly composed of variants around a single sign (see the CJEU's decision in that case here).

Taking the above answers on board, the judge went on to determine that the way the Mark was defined served only to pose a puzzle for the reader—it could be solved by interpreting the Mark either strictly (as the exact graphic representation), as the abstraction proposed by Glaxo or the potentially infinite marks proposed by Sandoz.

While he accepted that the first solution to the puzzle was a single sign, in his view the registration for the Mark had not limited itself clearly and unambiguously to just one such sign (it likely didn’t help in the judge's mind that Glaxo had, before the EUIPO, demonstrated another rectangular form of the abstraction which it said was a form of the Mark). The Mark was not sufficiently precise, clear or unambiguous as it set the reader a puzzle, and some of its solutions do not leave the reader any more certain of the Mark’s form. Consequently, the Court held, it was invalid.

One can see shades (sorry) of the Cadburys judgment in HHJ Hacon’s thinking and indeed the Judge set out Sir John Mummery’s excellent precis of the key principles that could be distilled from the various CJEU decisions on colour mark registrations as part of his judgment. In particular, in my view the Judge particularly had in mind the following two points raised by Sir John in the Société des Produits Nestlé SA v Cadbury UK Ltd judgment:

(7) As for the second condition of graphical representation, in a mark consisting of two or more colours designated in the abstract and without contours, qualities of precision and uniformity are required. The colours must be arranged by associating them in a predetermined and uniform way.

Colour without form/in a multitude of forms

(8) Those requirements are not met by the mere juxtaposition of colours without shape or contours, or by reference to colours in every conceivable form, so that the consumer would not be able to recall or repeat with certainty the experience of a purchase. The scope of protection afforded by such a mark would be unknown both to the competent authorities responsible for maintaining the register and to economic competitors. Registration would confer unfair competitive advantages on the proprietor of the mark.”

Further, it is worth noting that although HHJ Hacon declined to make a reference to the CJEU, he hesitated on the basis of Marques’ permitted intervention last year in Red Bull where the General Court said:

“…it must be held that the case raises questions of principle regarding the graphic representation of a mark consisting of colours per se in the application for registration and in the registration, at least so far as concerns the interaction between the description of such a mark and that graphic representation in order to satisfy the requirements of Article 4 of Regulation No 207/2009.”

Although it is clear that the law envisages a combination colour mark is capable of being a sign, it remains to be seen just how one may successfully delineate the scope of protection for such a mark in a clear and precise manner within the bounds of the law (even when the new rules come into force next year). The guidance from HHJ Hacon is clearly a helpful further clarification of what will not be accepted, but no doubt practitioners will await any guidance on the threshold of precision that is acceptable with baited breath."