This post will address the error message "Unfortunately, Contacts has stopped" on Samsung Galaxy S5.

While many Samsung Galaxy S5 owners were happy the day Samsung rolled out the much anticipated Android 5 Lollipop update, all the excitements turned to disappointments when the once working phone became a useless piece of technology. 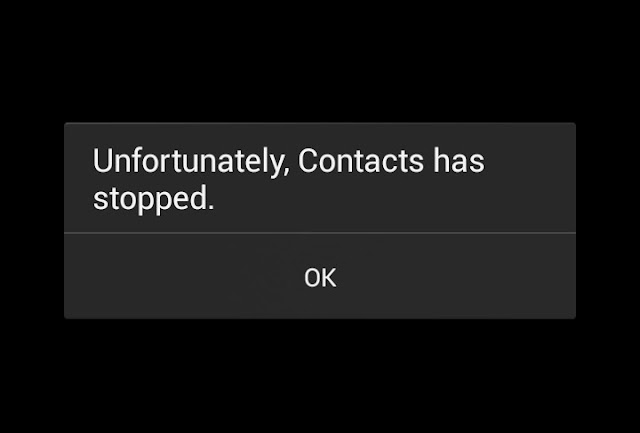 One of the most common errors owners were getting was "Unfortunately, Contacts has stopped," which often pops up when you dial a number or when you open the Contacts app. There were, however, some reports that the error would also pop up without apparent reason or cause.

I will guide you through troubleshooting your phone to find what the culprit is and fix the problem.

Since we don't know, as of this point, what's causing the problem, we will have to troubleshoot the app that's specifically mentioned in the error message--Contacts. The most logical thing you can do about it is to clear its cache and data so it will be reset to its default settings. Don't worry, your contact list will not be touched. There is one service that handles all your contacts and that's the Contact Storage service.
If the problem occurred without apparent reason or cause, then the app may have just crashed. I would assume at this point that you have already rebooted your phone because that's one of the most effective (and the easiest) ways to deal with app crashes.

If you have Google+ app installed on your device, there's a chance it might be causing the problem especially if you allowed to the device to sync with it. There were actually a lot of owners who said disabling the app may just cause this specific problem, so I suggest you try it as well. It's up to you if you just want to disable or uninstall it.
More often if the error is triggered by the Google+ app, it will occur if there's no internet connection or if it intermittently cuts off.

Assuming you already cleared the cache and the data of the Contacts app that you have already stopped or uninstalled the Google+ app and the problem still persists, try booting the phone in safe mode to isolate the problem. It will tell you right away if third-party apps have something to do with it or not.
If the error message still occurs in safe mode, then the problem must be caused by one or some of the pre-installed apps or the firmware itself. Otherwise, you just have to find the third-party app that's causing it and uninstall it. You may start from the most recent apps you installed.

If the problem occurred after the recent Lollipop update, then there's a chance some of the caches have been corrupted. This step will guide you through deleting all caches, good and bad alike. Don't worry, none of your files, data or settings will be deleted or changed. Also, the phone will be forced to create new caches after this procedure…

This is going to be the last resort if all else fails. Don't forget to backup all your files and data especially ones that are saved in the phone's internal storage as they will be deleted.
In case the reset failed as well, then it's time you brought the phone to your provider and have it checked. The firmware you installed may have some issues. Their technicians will reinstall it for you.

thank you for reading How to fix Samsung Galaxy S5 "Unfortunately, Contacts has stopped" error after Lollipop update