At last, the final face of Microsoft Windows is released on June 29, widely called as "WINDOWS 10". 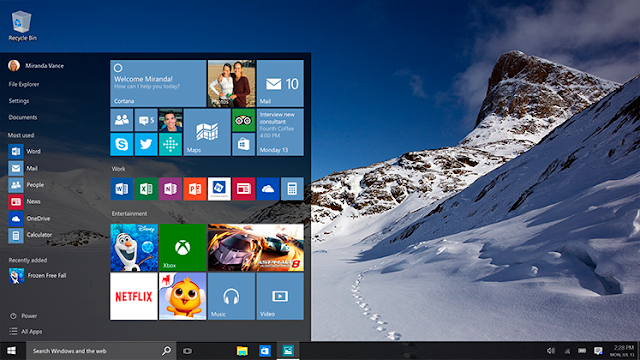 Windows 10 is a personal computer operating system developed by Microsoft as part of the Windows NT family of operating systems. Officially unveiled in September 2014 following a brief demo at Build 2014, the operating system reached general availability beginning on July 29, 2015.[2] The main goal of Windows 10 is to unify the Windows operating system across multiple Microsoft product families—including PCs, tablets, smartphones, embedded systems, and Xbox One, as well as new products such as Surface Hub and HoloLens—allowing these products to share what Microsoft described as a "universal" application architecture and Windows Store ecosystem. Expanding upon the Windows Runtime platform introduced by Windows 8, this architecture allows applications to be adapted for use between these platforms while sharing common code.

As we can download the Windows 10 ISO files from https://www.microsoft.com/en-us/software-download/windows10ISO.

The above URL is spread out widely in forums,websites,social medias,etc.

But there comes the twist.

When we try to access the above URL from any windows system,it automatically redirects to this URL https://www.microsoft.com/en-us/software-download/windows10.

Thus microsoft forces you to download their Media Creation Tool.So that you can directly upgrade by using that software which holds 18 Mb.

But this is not a technical person wants and also this is not an ordinary person wants, who has a slow internet connection.
So he/she doesn't want to re download the whole iso setup repeatedly while installing Windows 10 to different systems.
So we wanna crack open a way to download the Windows 10 ISO that microsoft cunningly hides from windows users,forcing them to use their downloader tool.

You may heard about User Agent.It is a string that describes about a client system to a web server.So that the web server can identify,which operating system and browser that client is currently using.

Before that i have tried to access the Windows 10 ISO download page from my android phone's chrome browser.The microsoft's server does'nt redirects me to the other URL, not forcing me to download the Media Creator Tool,instead it just spits out the ISO downloader page.

Don't worry its simple.In this case i am using firefox as my browser.

If you are lazy like me :)
Sorry i can't put the direct links,because microsoft have updated their servers so that the download link generated by a specific client will only valid for a day(24 hours).But you can ask me to generate one for you,if you are so lazy to follow the above steps.

Hope you enjoy the most promised version of Windows from Microsoft.

thank you for reading Unable to find download link for Windows 10 ISO?